Nodaway County was Incorporated in 1845 with the county seat located in Maryville, MO. Our current classification is — Third Class County Township Government. Our 2010 Census population is 23,370 with an assessed valuation of $313,975,586 (2013). With 14 elected Officials our county consists of Agricultural and Industrial Businesses. 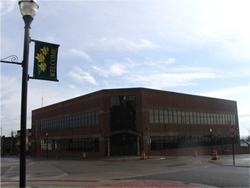 The area which became Nodaway County was once a part of Indian lands covered with tall waving prairie grasses on the uplifts or “narrows”. Imagine the vast prairies heavy with game and uncluttered by trees, except along the three north-to-south rivers and the small creeks!
Missouri territory became a state in 1821, but the Indians still held the triangle to the northwest, which contained very fertile and desirable land.